This morning I listened to one of my favorite podcasts, NPR’s TED Radio Hour, and was struck with the idea that many of us are not aware of the moment we’re in. Distractions pull us out of the moment — social media, games on the phone, text messages, and even worries about what others think of us. What really triggered my introspection was when during his interview Boyd Varty said “The essence of wisdom is to be where you are. Allow action to arise from that being.”

I was recently counseling with a group of nine 16 to 18-year-old young men. We were talking about the challenges and worries they face in life and explored the idea of taking time to sit quietly and think. The conversation didn’t seem to be going very well. There were really at least five or six separate conversations going on with some of the boys talking amongst themselves, a few looking idly at their phones, and one or two actually focused on the discussion. None of them were in the moment.

Expecting outrage I took a huge chance … and asked them to silence their phones so they wouldn’t even feel the vibration of a notification and to put them either on the floor, face down, or on the table. To my pleasant surprise, they all complied! In fact, they seemed relieved. The next 30 minutes were the most productive 30 minutes I’ve ever spent with that group (I’ve been working with them for almost a year). Each committed to spend time throughout the week, quietly pondering questions and concerns they have and the also agreed to share experiences they may have the next time we meet. As they filed out, almost all thanked me for the discussion.

The magic of eliminating one distraction (a big one, no doubt) seemed to bring each of them into the moment. Not only did they listen but they contributed their own thoughts to the conversation. Of course I had to target some specifically, making sure they participated instead of remaining quiet.

We live in a world that abhors focus, thoughtfulness, and calmness. We’ve all experienced things like coworkers answering text messages instead of focusing on the topic at hand in meetings, spouses thinking of what their going to say instead of listening to each other, teenagers claiming to do homework while watching Netflix and posting comments on social media, theater goers checking scores, or people taking in a beautify vista through the lense of their smartphone.

But Varty tells the story of lions and how amazing it is to watch them sleep at least 18 of each 24 hour day, then wake up and become terribly focused and efficient hunters. They go from rest to action in an instant. I’ve never had the chance to observe lions before, but I do have a dog and exhibits much the same behavior. 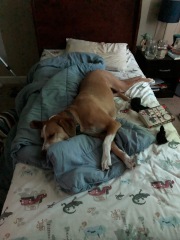 He’s almost always asleep. But when he’s awake, he is in the moment and has such focus that he misses sometimes things that are just ahead of him. It seems as if that rest leads to intense sessions of great focus.

So practice resting and thinking without distractions. It might lead to more focus and efficient effort.